BYC is enjoying their country visits!

Our students have been given an International passport (not real).  So far, they have taken out the stickers to place their entrance into Germany and Canada in their passport.

For Germany visit, Mrs. Sarah Juntune, our special guest, showed us how to make pretzels, which we ate the next week, and she told us a little about the country that she lived in.  We had the opportunity to make a pretend gingerbread cookie from paper, that the children there wear around their neck for Oktoberfest which is really in September.  We learned a song as we did an exercise to Head, Shoulder, Knees and Toes in German.  For another snack, we had a buffet where we got to assemble cracker sandwiches with German sausage and cheese!

Canada is our topic last week and this week.  Mrs. Debbie had baked us fish sticks from Canada’s water.  They were gobbled up. We learned that the Maple leaf is the countries emblem and they have 10 types.  Learning about the flags from each country, the children have the opportunity to make a wind sock with the flag.  Did you know that Canada has more land mass than the USA?

Last week, we all got to use an apple slicer that spiral cuts, peels and cores.  We got to eat the peelings and placed the slices into a crock pot.  Next weeks snack will be our very own homemade applesauce made from 3 different types of apples!  YUM.

Every session, the BYC students have the opportunity to make many choices after they do their homework, silent read or practice math facts.  This year, we are offering yoga to students too! 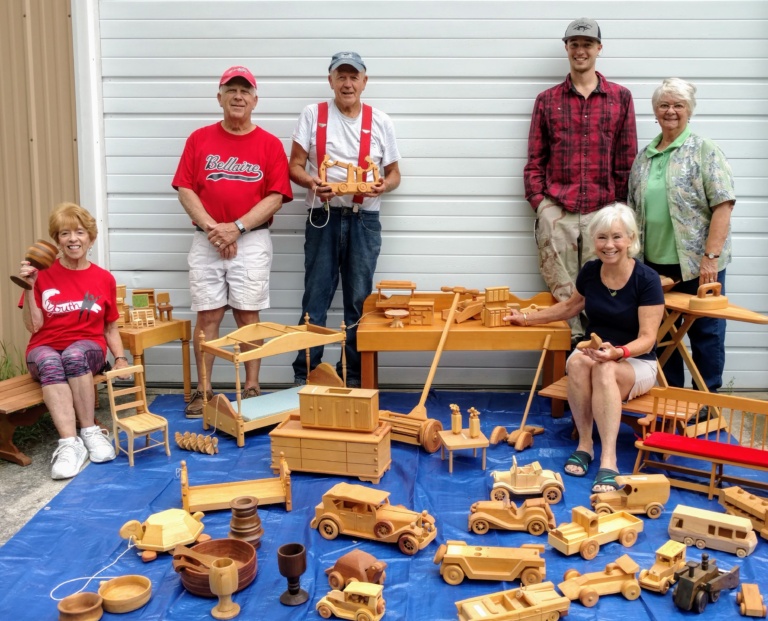 The Bellaire Youth Center offered for sale many beautifully crafted wooden toys and more during the Rubber Ducky Arts and Crafts sale in August 2017.  Back in June 1993, the Antrim County News presented an article about the very same, Tatur-Bilt Wooden Toys and Such, a home business that were made by Ed and Alice Tatur.  The toy makers created doll houses, furniture, moveable toys and much more.  The toys were discovered in a recently purchased home on Lake Bellaire’s Cottage Drive from the 1990s. Proceeds were used for the 501C3 Bellaire Youth Center and programs this 2017-18 school year.

The Bellaire Youth Center (BYC) is pleased to offer their FREE “Afterschool Enrichment Program” on Tuesdays from 3:00 – 5:00pm, during the 2017-2018 school year for all Bellaire children in the district.  BYC will begin our sessions on September 19th and end on May 8th, 2018. NEW this year, we will only be offering to the Kindergarten through Third graders.

Our theme this year will be the “Magic of Stuff”!  Students will enjoy experimenting with many kinds of hands-on activities, conduct trials with ingredients, have fun assembling with various items from the junk tub, learn from technology using tablets, design creations using Legos, partake in Yoga, enjoy arts and crafts, games, Wii, and maybe learn a magic trick or two, plus more!

Our BYC day starts with a Healthy Snack immediately, then all students are expected to work on homework with volunteer assistance, and then a wide assortment of free choices are offered for the remainder of the session. If weather permits, there will be outdoor activities offered.

As the BYC Director, Mrs. Debbie, I look forward to offering opportunities for your children to have fun!  If you have any questions, concerns or just want to talk, please contact Debbie Goldenberg at bellaireyouthcentermi@gmail.com 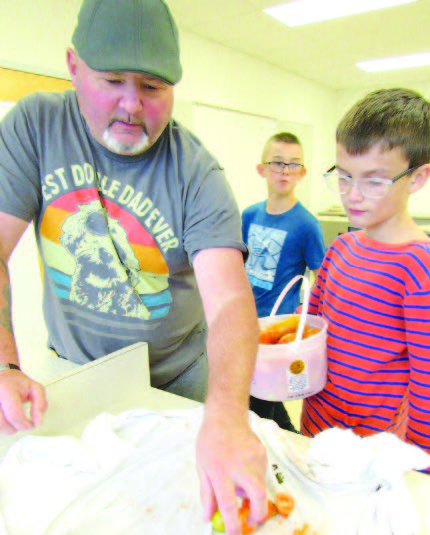 BELLAIRE – It’s not surprising that so many kids are enrolled in the Bellaire Youth Initiative (BYI) cooking class. Now in its third year, the class is a great opportunity, with kids from fourth- through ninth grades being trained by two seasoned teachers, “Grandma” Dee Lynch and Scott Udell, a local chef known for his barbeque.
The 16 kids attending the class spend five weeks learning to make salsa, spaghetti sauce, applesauce, and zucchini bread.
According to current BYI board chair Bryan Hardy, all of the group’s class offerings are intended to provide step-by-step instruction to connect kids with the real world skills that used to be taught as part of a school’s regular curriculum. Since home economics classes are no longer offered in most public schools, the young chefs are savoring the opportunity of learning to navigate a kitchen.
“We enlighten them about how life used to be,” Hardy said. “Doing things step-by-step from start to finish helps them understand how life used to be.”
He added that all the offerings are meant to provide the kinds of practical education that the local school board cannot afford to offer. Other BYI classes have included biking, guitar, sewing, performing arts and robotics. Currently, more than 150 students are participating in the afterschool programs.
And, without question, the students are actively engaged in the learning process.
On a recent Wednesday afternoon, students were intently focuses on the task at hand, making salsa. On each of four stovetops, large pots of salsa were bubbling away as students took turns stirring and adding vegetables to each one. Lynch and Udell circulated among them, suggesting adjustments to the burner temperature and answering questions.
Most of the ingredients came from the garden that was cultivated, maintained and harvested by Bellaire students last summer, a joint project of BYI, Rotary and the Juniper Garden Club.
As the students worked, things seemed to be simmering along without boiling over. There was a lack of drama and raised voices that suggested how involved the kids actually were. And 28 quarts of salsa later, the class was able to donate some quart jars to the Bellaire Food Pantry.
As the vegetable chopping came to an end and the steaming pots were nearly ready, Lynch and Udell reminded the kids to pitch in and clean up after themselves, and that their work areas would be inspected for cleanliness.
According to Lynch, all of the BYI classes have been very popular and current students have often participated in other activities that the organization has sponsored.
“Many involved in this class were involved in other programs last year,” Lynch said. So much so that she will fill the next class with kids who are now on the waiting list. And BYI will continue to program after school classes because as she and Hardy relayed, “we felt the need for this kind of program and we are dedicated to providing it.”
Some students have already expressed an interest of participating in next summer’s garden. When it’s planted again in June, a whole chain reaction of activities and future opportunities will start all over again.
Both Hardy and Lynch stress that phenomenal cooperation from Bellaire Public Schools has been essential in creating the programs that BYI offers. For example, the cooking class takes place in what used to be the Home Economics classroom. But the rationale is to add these important skill-based classes back into the recipe by making them available, and by trying to provide them at no cost to the students, school district or parents.
For Udell, a father of three who wears a few different hats in the community, the class makes him especially happy. As a builder with an irrigation business and a seasonal weekend barbeque business, he is used to a sometimes hectic environment that always remains in motion. With pots boiling and a classroom full of energetic kids, he remains calm while encouraging the young chefs.
“I really enjoy watching other people learn,” Udell stated. His company, Other Side Irrigation, also helped with designing and maintaining the garden this summer.
Based on the success of the local program, Hardy believes that the BYI and Bellaire community have shown leadership in establishing the afterschool programming.
“I think that there will be a lot of other small communities who will try to do similar things for their students,” he said.
For more information, visit the Bellaire Youth Initiative website at bellaireyouthcenter.com.